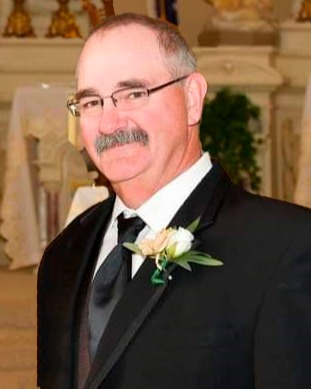 Thomas Heaton, 62, of Lincoln, ND, passed away November 6, 2022, with his family by his side after a yearlong battle with pancreatic cancer.

Visitation will be held 1 hour before the service at the church.

A private burial will take place.

Tom was born June 23, 1960, in Bismarck, the sixth of ten kids to Russell and Lucile Heaton. He was raised on the family farm in McKenzie, ND. After graduating high school, he attended NDSCS.

Tom married his high school sweetheart, Cindy Ryberg, on July 18, 1980. Together, they raised three children; Kristy, Justin and Megan. Later, he was blessed with his four grandchildren that meant the world to him.

Tom graduated college in 1980 and worked multiple places as an electrician before changing careers and working for the Bismarck Public School system. He worked 30 years as a custodian before retiring on November 8, 2020. He had many great coworkers over the years, many of whom became close friends including his “little buddy” Marvin Bauer, that he will cherish forever.

Tom enjoyed the outdoors; fishing and hunting were his passions. Tom, with his best friend, Dan Welch, by his side, put on many miles and made great memories. As his kids got older, he loved to hunt and fish with them, turning into more of a guide than the fisherman or hunter himself. Tom and Cindy loved to camp. They spent their summers at the campground with friends, doing what they loved. In his spare time, he enjoyed gardening and attending his grandson's sporting events.

He was proceeded in death by his parents, Russell and Lucile Heaton; parents-in-law, Virgil and Donna Ryberg; sister, Mary Heaton; and his grandparents.

We would like to thank Dr. Kurniali and his staff at Sanford for their great care.

To order memorial trees or send flowers to the family in memory of Thomas Heaton, please visit our flower store.