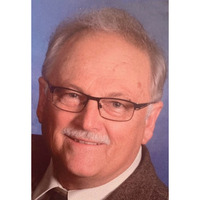 Tom was born on Aug. 15, 1941, the first of eight children born to Wendell and Elizabeth (Gross) Kambeitz in rural Napoleon.  After high school, he attended Humboldt Institute in Minneapolis.  He accepted a position in Chicago, Illinois with the Burlington Northern Railroad for three years.  In Chicago, he met the love of his life, his wife of 57 years, Patricia Brezinski.  After their engagement, Tom returned to Napoleon as he had found that he loved and missed farming.  In June of 1963, he returned to Chicago to marry Pat; then the newlyweds moved to Napoleon where for eight years they farmed and started a family. While farming, he was very mechanically inclined and looked into expanding his training in refrigeration and heating and air conditioning. He decided to spend the next two winters in Chicago, attending the American Institute of Engineering and Technology (AIET).

Following his graduation from AIET, Tom started Kambeitz Refrigeration in Napoleon, shortly before moving to Bismarck where he started Capitol Refrigeration. He later purchased Bismarck Refrigeration and after his success owning and managing this company he decided to develop a brand new company Bismarck Heating and Air, Inc. that he independently owned and managed until he sold it to his son Mike in 2011.  He also started Taylor Dakota Restaurant Distributors and New Vision Security.  He later sold the Restaurant supply company to his son Tom. Throughout his work life Tom worked many long hours, whether farming or running a business. Because he was fair and generous with customers, he quickly built a loyal client base.  Right up until his illness, he was at work daily and was very active at the shop, where the employees of Bismarck Heating and Air daily relied on his vast wealth of knowledge, experience and his ability to problem solve.

Tom was a wonderful family man and loved spending time with his seven siblings, three children, six grandchildren, and two great-grandchildren.  Family and friends could call him anytime and rely on his support.  He loved helping others and he especially enjoyed telling numerous stories to whomever would listen. He loved making others laugh and smile. He was a member of Corpus Christi Church and belonged to the Knights of Columbus. His deeply held Catholic faith was the rock he relied on throughout his lifetime.

He was preceded in death by his parents; sister, Lucia Gray; brother-in-law, Rich Gray; and nephew, Steven Gray.

Tom was very devoted to his wife and family, and will forever be in our hearts. Pat, his children and grandchildren never left his side while in ICU and were at his bedside supporting him daily with deep loving care. He recently mentioned to Pat, while he was hospitalized, to please donate more to St. Jude’s, as it was one of his favorite charities.  After being hospitalized, he felt even more strongly about helping sick children. Please consider a memorial to the St. Jude Children’s Research Hospital in his honor.

Funeral arrangements during this time of COVID are difficult.  A public viewing will take place from 2 to 5 p.m. Tuesday, Dec. 1 at Parkway Funeral Service, 2330 Tyler Pkwy, Bismarck, masks are required for attendance.  In order to keep social distance guidelines, the family will not be present for the viewing and will have a private rosary vigil and private funeral mass. A service livestream for Tom’s funeral mass will be available at 10 a.m. Wednesday, Dec. 2. To view the livestream at the time of the service, click here: https://corpuschristibismarck.com/

To order memorial trees or send flowers to the family in memory of Thomas Kambeitz, please visit our flower store.