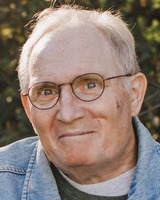 Surrounded by his loving family, Thomas Allen Paul, 64, walked into Heaven on December 9, 2021, at the Sanford Medical Center.

Tom was born in Minot on January 13, 1957, to Herbert and Dolores (Sawatzke) Paul. He attended elementary school at St. Leo's Catholic Church and in the seventh grade moved to Minot Ryan High. Later, the Paul family moved to Hope, where Tom completed his senior year.

During Tom's time in Minot, he helped his family raise quarter horses and worked for his dad's dry-cleaning business. Following graduation, Tom worked for several farmers in the Hope area and along with three of his brothers, competed in bull riding.

In 1983, Tom met the love of his life, Ruby Just, and they were married in October 1984, in Wishek. They were blessed with three children, Chelsey Lynn, Christof Thomas, and Chantell Justine.

In 1990, Tom was diagnosed with Multiple Sclerosis and despite the disease ravaging most of his body, he maintained a positive attitude and lived life to the fullest. However, Tom's biggest accomplishment was giving his heart to the Lord and making sure to share his faith with anyone who entered the family home. Tom was a devoted and dedicated father and husband and most of all loved his 11 grandchildren with all of his heart. He also loved playing multiple Yahtzee with his mother, Dolores, and his sister, Jan, each and every week.

Last and certainly not least, thank you to Linda Baker and Mike Connelly, for their extraordinary care to Tom. These two people embraced Tom like family and showed him so much love, compassion, and friendship.

Finally, in the words of Tom, "If you would die today, do you know where you're going? Well, let’s make sure."

To order memorial trees or send flowers to the family in memory of Thomas Paul, please visit our flower store.