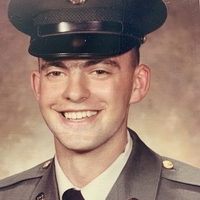 Tom graduated in 1966. And the story begins:

Worked at a post office in Bismarck. Attended BJC for one year. He served in the army until 1969 in Vietnam. He returned home, attended BJC two more years and worked for the postal service. UND came next, for one year. Valley City was also a part of his college years, for two years. The summer of 1995, he signed up for 20 some credits at NDSU - working on a master’s degree in Guidance and Counseling, then signed up for a two-year teaching job in Australia. Upon returning, he signed a teaching contract in Larimore. He broke that contract to go to Florida. Larimore revoked his teaching certificate in North Dakota. In Florida, Tom taught at Umatilla Elementary, northwest of Orlando.

Tom moved to Orlando and worked for Disney for a year, substitute teaching at the Elementary level during the day.

More change. Driving a cab in Orlando. Worked for Color Tile, selling floor tiles. Soo Line was hiring in the Chicago area, went on strike, he went back to Florida. Then Burlington Northern - Kansas for two weeks, La Cross eight weeks, Furloughed. Went to Chicago for two months. He switched to Amtrak for a couple of months. Bid up St. Cloud. Then got furloughed onto Salisbury, North Carolina for six months, then to Atlanta, Washington D.C., left and went back to St. Cloud as soon as it opened up. Continually tried to get into Florida. Got in a couple of times. In 2005 he got in from St. Cloud to Montana. Tom went on disability Jan. 2, 2011.

Tom retired and stayed in Florida. In 2019 Tom married Monica. The last year and a half was the happiest Tom had ever been. Thank you, Monica.

Tom is dearly missed by his siblings, nieces, and nephews.

A graveside service will be held 10 a.m. Monday, July 12 at the North Dakota Veterans Cemetery, Mandan.

To order memorial trees or send flowers to the family in memory of Thomas Weinmann, please visit our flower store.