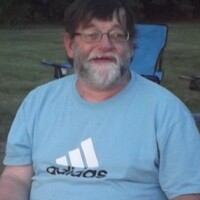 Timothy Jay Paasch, 59, passed away April 8,2021 unexpectedly of natural causes at his home in Bismarck.

Tim was born December 7, 1961 to Ernest and Rose (Oglesby) Paasch in Jamestown. He attended elementary school in Wimbledon and graduated from Valley City High School in 1980. Tim lived his entire adult life in Bismarck working various jobs. He was employed at the Walrus restaurant for the last 8 years at the time of his death.

Tim had many passions in life. He was a avid biker, enjoyed bowling, was a history buff especially anything pertaining to WW11.  In recent years he had a passion for playing poker.  In 2019 he qualified and participated in a Free Poker League national tournament in Las Vegas. Tim’s biggest lifelong passion was being a Atlanta Falcons football fan. Nearly everyone in Bismarck knew Tim and his big hearty laugh was unmistakable.

He was preceded in death by his parents; and brother, Dennis.

The family will be holding a Celebration of Tim’s Life later this summer.

To order memorial trees or send flowers to the family in memory of Tim Paasch, please visit our flower store.