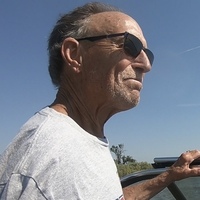 Tim was born in Breckenridge MN to Marvin and Rita (Allen) Perius on September 28, 1950 and raised in Bismarck.  He was educated at Cathedral Elementary and graduated from St. Mary’s High School in 1968. Tim later earned an Associate Degree in Business from Bismarck State University.

He proudly served his country joining the U.S. Army and serving in Vietnam after high school. Upon his return from Vietnam He began working for his father, alongside his brothers at Perius masonry, a trade he excelled at. Tim worked for other masonry companies throughout his career.

While serving in the Army, Tim married his high school sweetheart, Marvaline Holzer and together they raised their children, Shawn and Dawn. He was very proud of his two grandsons Grant and Wyatt.

Tim was a dedicated fisherman and sportsman. Along with his long-time fishing partner Tim Ktytor, he won the Bismarck Big Muddy Fishing tournament and they were perennial competitors in the ND Governors Cup.  He took time to teach many friends and relatives the nuances of fishing the Missouri River always stating a bad day on the water was better than a great day at work.

Appropriately, Tim will be buried at the ND Veterans cemetery, where his final resting spot will be in view of and near the river he enjoyed so much. Time not spent fishing was spent watching the Minnesota Twins and NASCAR Racing. He was a huge fan of Dale Earnhardt Sr.

Tim worked tirelessly helping friends and neighbors during the 2011 Bismarck flood, in which his own home sustained damage. In his last several years Tim provided care and support for his wife in their home. A man of few words, he was to the point and never minced words.  Tim will be missed by all who knew him, especially those lucky enough to spend time on the water with him.

Tim was preceded in death by his parents, Marvin and Rita Perius; In-laws Pete and Aggie Holzer; and Brother-in-Law, Ken Holzer.

To order memorial trees or send flowers to the family in memory of Tim Perius, please visit our flower store.