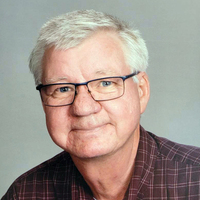 Tim was born December 1, 1958, to Wilber and Deloris (Haustveit) Eide. He attended and graduated from Tioga High School. Following graduation, he worked in the oil patch and spent that time learning more about himself. While working in construction, he attended and graduated from North Dakota State University. Tim enjoyed a 20-year career with Natural Resources Conservation Service (NRCS). His career brought him to various towns in North Dakota, including Killdeer, Towner and Steele. He retired in Napoleon from NRCS in May 2021.

In his younger years, Tim enjoyed riding dirt bikes and spending time with his brothers working on cars.

He was very detail-oriented and passionate about the outdoors. Tim was known to remember the exact species name of each plant, tree and element of the outdoors that he could. If he didn’t remember it, you could bet he was going to research it right away! He enjoyed learning about Native American culture and artifacts. You could also find Tim spending time outdoors, whether it be hunting, fishing, woodworking, or capturing the world through the lens of a camera. When he spent time indoors, he enjoyed watching Westerns and spending time with family. Tim was blessed with three children, Sarah, Justin, and Ariel. He loved his grandchildren immensely and they too returned the love.

Possibly, one of the most important parts of Tim’s life was taking time out of the day to slow down and enjoy the moment. He was a wonderful man who held the values of honesty and integrity close to his heart.

On September 7, 2013, Tim married the love of his life, Tracey Wetsch, on the Lewis and Clark River Boat. They share many wonderful memories of time spent together.

He was preceded in death by his parents; and brother, Conley.

In lieu of flowers, memorials may be sent to the Northern Plains Botanic Garden Society, Fargo, or to a charity of the donor’s choice.

To keep Tim’s memory alive, the family requests that those who knew and loved Tim take a few minutes out of their day to enjoy the outdoors and spend a moment being in the present.

To order memorial trees or send flowers to the family in memory of Timothy "Tim" Eide, please visit our flower store.