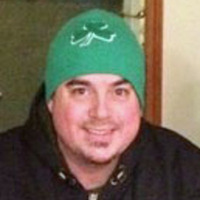 Tyler Dain O’Dell, born November 7, 1979 to Patrick and Julie (Wilson) O’Dell in Fargo, passed away at his home in Bismarck on July 5, 2021. A memorial service for Tyler Dain will be held 1 p.m. Monday, July 12 at GracePoint Church, Bismarck. A service livestream will be available on the church's website: http://www.gracepoint.life/  Reception to follow. Tyler will be buried at Riverside Cemetery, Fargo, at a later date.  Cremation has taken place.

Tyler was an incredibly talented and kind man who is already missed by so many.  Tyler grew up in the Fargo area and moved to Bismarck around 11 years old.  He always talked about the old neighborhoods, apple trees, and streets of West Fargo that he was fond of, but always said he did a lot of growing up in Bismarck. He attended Bismarck High and Century High School and received a General Education Degree. From 2001-2002 he attended Le Corden Bleu Institute where he got to refine his real passion: cuisine.  Tyler proudly answered “in which city and state” when asked where he has worked.  He was happy to say he has done it all.

He is affectionately called by his brother “My bigger little brother.”  Shawn and Tyler were born nine years apart but still had a special bond.  Tyler often talked about getting to hang out with Shawn.  He would let him watch movies he wasn’t supposed to and Tyler loved it.  They would play video games or cruise in Shawn’s car, always blasting music that Tyler also loved.  Tyler often talked about growing up at the O’Dell family cabin on Buffalo Lake.  He fondly remembered card games, fires, hikes, fishing and even being rolled in goose poop by Shawn.

Tyler worked many great places in Bismarck-Mandan, most recently at The Butterhorn where he was able to fire his passion again. The gracious owners showed enormous respect to Tyler by closing their doors in mourn after his passing.  They expressed that he was dedicated and hardworking; a trait that anyone that knows Tyler can tell you is true. He spent a good amount of years working under Bob Serr at the Little Cottage Cafe and he admired the business there. Anyone else that knows Tyler can tell you he makes a superb breakfast.  His special scrambled eggs, caramel rolls and hashbrowns just to name a few.  He loved breakfast and would affectionately refer to his “relationship” with pancakes.

Tyler was a huge part of so many lives but to his family is where Tyler truly shined.  He was a proud uncle to Zachary, Kelsey, Dylan and Anthony and always talked fondly of them.  Tyler also stepped into a huge family role that will be forever treasured.  Tyler helped raise the siblings of his girlfriend and future wife for over six years.  Samantha and Charlie will tell you that Tyler taught them many things, made them scrumptious meals and helped them in any way he possibly could.  He loved them into adulthood and got to see both of them become parents.  He was so proud.  Tyler became the happiest Godparent you ever saw to Charlie’s daughter, Hadley Rose.

Tyler loved to workout and push his body physically.  He would study many techniques and was able to refine them to see the results he wanted for his body.  Many people admired his physical strength and would often break his own lifting records. His strength also came in handy for he and Dad’s projects which Tyler always admired working with his Dad.  He would refer to Dad as “SuperDad.”

Two things you knew you could find at Tyler’s house were good music and animals.  He was a fan of Alice in Chains, Chris Cornell, Everlast, tons of metal, gangster rap, oldies and so much more.  Depending on the mood or the hour, he was jamming something with his fur babies.  He was a proud fur Dad to his two cats, Tim and Harry.  Tim and Tyler had a special relationship, and Tyler affectionately called him “King Tim.”  His biggest baby is of course Bruno.  His beloved and faithful companion. That dog’s heart is as big as he is and Tyler melted for Bruno.  Everyone has.  Bruno has his special routine with Tyler’s parents after walks with Tyler, and anytime they went to visit.  Some of the best memories Tyler and Bobi have surely had Bruno in them, including their wedding and honeymoon.

Tyler leaves behind a wealth of friends and accomplishments.  He leaves behind two loving parents who could not be more proud; Pat and Julie O’Dell, Bismarck.  He will be missed by his brother and sister in law, Shawn and Andrea O’Dell of Wolverton, Minnesota.  He will always be loved by Bobi Jo O’Dell, Bismarck.  He will be remembered by niece, Kelsey Kosanke; nephews, Zachary O’Dell, Dylan Emerfoll and Anthony O’Riley (Kendall);  mother-in-law, Margo McCormick; sisters-in-law, Jessica Herbel (Cameron and Braedon) and Samantha McCormick (Daniel and Antonio); brother-in-Law, Charlie McCormick (Ashley and Hadley Rose); and several aunts, uncles and cousins.

He was preceded in death by grandparents, James and Joyce O’Dell, and Carroll and Dorothy Wilson; and brother, Ryan William O’Dell.

To order memorial trees or send flowers to the family in memory of Tyler O'Dell, please visit our flower store.