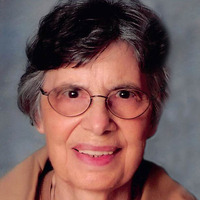 Veronica was born on January 30, 1929 to Peter and Rosa (Ferderer) Doll in Almont. She was educated at country schools and then moved to Bismarck in 1951. On September 26, 1959, Veronica married John P. Oberst and together they raised four children. John and Veronica owned and operated a paint contracting business, and in 1977 opened a retail paint store. They continued to run the business until their retirement in 1993. John passed away in 2016.

Throughout her life, Veronica pursued many hobbies, including sewing, quilting, cross-stitching, knitting, painting with oils and watercolors, upholstery and gardening. Veronica was a great cook who loved making holiday turkeys. She and John made hundreds of quarts of applesauce from the apple trees in their backyard. They also made so many loaves of Veronica’s amazing flaxseed bread that they wore out their bread-making machine.

She was a devout Catholic and a member of the Church of Corpus Christi since 1971. After their retirement, John and Veronica tried to attend Mass every day and said the rosary every night during their evening drive around Bismarck.

She was preceded in death by her husband, John; her parents; sisters, Ann Doll and Pauline Holkup; brother, Willie Doll; and infant brother, John Doll.

To order memorial trees or send flowers to the family in memory of Veronica Oberst, please visit our flower store.