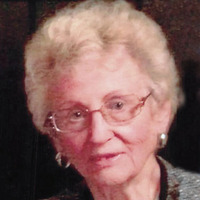 Viola was born September 23, 1931, to Jacob and Otelia (Nicklous) Straub in Glen Ullin. She was raised and educated in Mott. On March 13, 1950, she married Reuben Magstadt in rural Hettinger County. Together, they had five children and she stayed at home to care for them.

She enjoyed traveling down south to Yuma, Arizona, for 16 years. Viola also enjoyed camping and traveling to various other places. She was often found cooking, baking, canning and making some crafts.

She was preceded in death by her parents; son, Donald; son-in-law, Monte Preabt; and brother-in-law, Ernest Zimmerman; and Walter Hensel.

To order memorial trees or send flowers to the family in memory of Viola Magstadt, please visit our flower store.