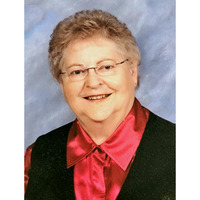 A service livestream will be available for viewing at Faith Lutheran's Facebook page: https://www.facebook.com/faithlutheranbismarck/

Visitation will be held from 4 to 6 p.m. Friday at Parkway Funeral Service, 2330 Tyler Pkwy, Bismarck.

Vi was born February 28, 1933 in Stark County on her grandparent’s homestead. She was lovingly raised by Ida and George Gerlich. She was very close to her grandparents and aunts and uncles (John Brueni and Emil Brueni of South Heart, Rose Butler and Martha Hoffman of Mott, Emma Bock of Dickinson and Edna Hansel of Spokane). She attended country school at Slope County School E6#1. After the eighth grade, she attended New England High school for two years and following her father’s illness, her family moved to Dickinson where she graduated from Dickinson High School in 1951. She went on to complete her teaching degree at Dickinson State Teachers College and taught first and second grade in the Rhame school. On September 15, 1954, Vi and Morris got married in Miles City, Montana, while Morris was on furlough after completing basic training at Fort Leonard Wood, Missouri. Morris was stationed in Germany and Vi bravely made the journey, by herself, to be with him where they lived for a year. The couple moved to Grand Forks for four years while Morris completed college. They moved to Bismarck where they raised their two children. She was widowed in 1985, after losing her husband of 31 years.

As a family, Vi enjoyed camping and spending time staying at the Wilkens’ family homestead on the Little Missouri River. She loved caring for children after raising her own children; she often provided childcare for neighbors and family. She spent many weekends visiting her mother, Ida, in Dickinson. She looked forward to traveling throughout the summers and visit her sister in Colorado.  Hockey season was her favorite time of year because she would travel over North Dakota and watch her son and later her grandsons play hockey. It was rare that she missed watching her favorite hockey team, the Fighting Sioux.

She loved to visit with the walking ladies, cozy up with a good book, attend the annual lutefisk and lefsa dinners, and spend time with her family. She looked forward to her phone calls from her dear sister, Ruth and good friend Marion. Vi had a genuine heart. She did not try to impress anyone; she would rather be present and love those who were with her. She was a kind, non-judgmental and soft-spoken lady. Her gentle and meek spirit will be remembered by all that knew her.

To order memorial trees or send flowers to the family in memory of Violetta Wilkens, please visit our flower store.