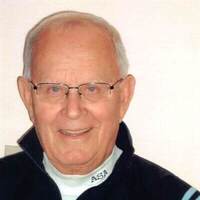 Walter M. Stack, 88, Bismarck, passed away Monday, May 3, 2021 at his home in Bismarck. A memorial service will be held at a later date.

Walt was born on January 24, 1933 in Hankinson to Walter H. and Corrine (Thompson) Stack. His father died when he was one year old, and he was raised by his mother and maternal grandparents. He attended public schools in Hankinson and graduated from high school in 1950. He lettered in basketball three years and was a co-captain of the Hankinson team which won 24 straight games and won the District title for the first time in school history before losing the Regional Tournament. He was a pitcher and first baseman for the Hankinson American Legion baseball team which lost the championship game of the state Class B tournament by one run in 1949. He was the Sports Editor for his high school paper as well as for the 1950 edition of the school’s yearbook.

After graduation, Walt attended Chillicothe Business College in Chillicothe, Missouri, and then worked as a bookkeeper for Land O’ Lakes Creameries, Inc. in his hometown.

He was inducted into the U.S. Army in April 1953 and served two years during the Korean War. He was honorably discharged in April 1955 and resumed employment with Land O’ Lakes in their Valley City Plant. In 1962, he accepted a position as City Recreation Director and enrolled in Valley City State University. He moved to Bismarck and began work in the State Tax Department in December 1965. In May 1969 he married Donna Baumgartner in Bismarck where they continued to make their home.

He retired from state employment in December 1993, having served 28 years – nearly all as Director of the Sales Tax Division. Following his retirement, Walt was elected to a five-year term as the retiree representative to the Public Employees Retirement Board and was appointed by that group to the State Investment Board.

Walt was active virtually his entire adult life in the Amateur Softball Association as an umpire. He served two terms as state Umpire in Chief and was elected Regional Umpire in Chief in November 2003. In that capacity, he served for six years on the National Umpire Staff. He actively umpired the game for over fifty years. Walt umpired at the highest levels of ASA softball when he umpired in the Women’s Major Fast Pitch National Championship in 1972 in Tucson, Arizona, and the Men’s Major Fast Pitch National Championship in 1973 in Seattle, Washington. Walt was awarded the Regional Award of Excellence in 2001 and was a member of the National Indicator Fraternity, the Gold Level of the Umpires Medals program and had attained Elite Umpire status in 2002. He was a co-founder and editor of Softball News, a statewide newspaper and was elected to the state softball Hall of Fame in 1987. Walter served as an At-Large Representative to the North Dakota Amateur Softball Association Executive Board and was the President of the NDASA Hall of Fame Society. He was a life member of the Bismarck Elks and long-time supporter of the Central Dakota Humane Society.

To order memorial trees or send flowers to the family in memory of Walter M. Stack, please visit our flower store.