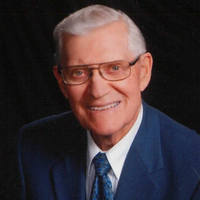 Visitation will be held from 5 to 7 p.m. Thursday at Parkway Funeral Service, Bismarck. A prayer service will begin at 7 p.m.

W. Warren DeKrey was born December 22, 1925 to Cornelius DeKrey and Winnie (Vellenga) DeKrey. He grew up on a farm near Pettibone, the third of seven children. He attended a one-room country school for grades 1 through 8 and graduated from Pettibone High School.

Upon graduation, Warren farmed with his father for a few years and then earned a Bachelor of Science degree from NDSU and a master’s degree in Agricultural Economics from the University of Nebraska.

On September 7, 1952, he married his high school sweetheart and the love of his life, Eileen Wyngarden. They have five children, nine grandchildren and 16 great-grandchildren.

Warren worked as county extension agent in LaMoure and then in Mohall, before becoming assistant professor in the Agricultural Economics Department of NDSU. In 1959, Warren began his banking career at First National Bank of Fargo as an Agricultural Lender. He became president of the Grafton National Bank in 1967 and eventually became a vice president at the Minneapolis corporate office before retiring in 1987 as president of the Bismarck Norwest Bank (now Wells Fargo). After his 32-year career with the bank, Warren became a lobbyist at the North Dakota legislature. He received numerous awards and honors throughout his career.

Warren’s love for God and family defined his life. He was known for his positive attitude and passion to help others; a sought-after mentor to many. He served on many boards and gave back to the community and church in great ways through his kindness, generosity and leadership. He taught Sunday School more than 25 years, and served in church leadership both locally and regionally.  Warren was an excellent singer; singing solos, in men’s quartets, and in choirs. He enjoyed photography, travelling abroad, golf and hunting.

Warren was an exceptional man who based his life on the principles of love, compassion and peace that are set forth by his savior, Jesus Christ. He walked with grace on the path God set forth before him. He was a giant among men – a beacon of light to many through his leadership. Warren leaves behind a wonderful legacy and will be greatly missed by his friends and family.

In lieu of flowers, donations can be sent to the Salvation Army in honor of W. Warren DeKrey.

To order memorial trees or send flowers to the family in memory of Warren DeKrey, please visit our flower store.