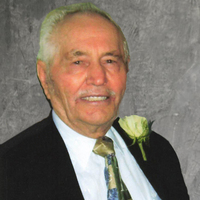 Burial will be held at Tuttle Cemetery, Tuttle.

Wilbert was born on April 8, 1927, in Tuttle, the son of John and Lydia (Ochsner) Wiesenberger.  He grew up and attended school in Tuttle.  At the age of 18, Wilbert accepted Jesus Christ as his Lord and Savior.  No truer friend to Wilbert was Jesus.

On October 5,1947, Wilbert married Vivian Viola Binder near Tuttle on the Weisenburger homestead farm.  From this marriage, six children were born.

He owned and operated a dairy farm southwest of Tuttle until he retired from farming in 2009.  Vivian passed away in July 1992. In December 1994 he married Debby Rakstad in Tuttle.

Wilbert always felt a calling to the ministry, first fulfilling the passion for farming and then at the age of 79 answering the call to the ministry.  After selling the farm in 2009, he moved to become a pastor at churches in Fessenden, where he resided until he retired from the ministry and moved to Carrington. Wilbert entered into the nursing home system in May 2020.

Wilbert's passion was music. Enjoyment was singing and harmonizing with his brothers, the Harmony Singers and with his children. He was truly anointed by God with the talent of singing and  as well as playing various instruments by ear. A self-taught musician in the art of playing Guitar, Harmonica, Jew's harp and the Dobro.

Other enjoyments of life were playing horseshoes and bowling. He owned and operated the Crown Lanes Bowling Alley and Restaurant for many years.

We as a family are very grateful for the care given to Wilbert at the Mandan Home and New Rockford Home. Each and every person that touched his life were his angels in skin.  Wilbert passed time at the home playing his instruments  and the music flowed out into the hallways of the home.  His room has now fallen silent.

The above is only a recap of 94 years of living an action packed life.  To Wilbert, we say see you later ߘŠ

To order memorial trees or send flowers to the family in memory of Wilbert Wiesenburger, please visit our flower store.