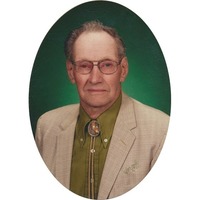 A service livestream will be available on the link below starting at the time of the service.

Burial will at Blue River Cemetery, Blue River, Wisconsin, at a later date.

William was born October 4, 1924 at home near Argyle, WI, to Alvin E. and Helen (Loken) Hanson. One of twins, he was baptized on October 17, 1924 at Yellowstone Lutheran Church and confirmed April 10, 1938 in West Bethlehem Lutheran Church, Edmund, WI. While he was growing up, his family moved several times as tenant farmers, especially in the early years. The farms were located at rural Volga, SD, and in southern Wisconsin: Darlington, Mineral Point, Linden and Edmund. Despite these many moves while being an elder sibling of a large farm family, education was always valued and William graduated from Cobb High School (WI) in 1943. He was a hired farmhand for his uncle Melvin Loken near Fairview, SD, until 1955 when he bought his own dairy farm near Blue River, WI. He was an excellent mechanic: rebuilding, restoring and keeping his tractors and vehicles running. He was also employed as a mechanic to fix equipment for his farming neighbors. William helped others with field work, haying and he drove a snowplow on rural Wisconsin roads.

William’s passion for his John Deere tractors was shown by his longtime membership in the SW Wisconsin 2-Cylinder Club and his participation and success at many tractor pulling contests. He sold his farm in March 2007 and moved to Bismarck, ND, to live with his twin brother, Wilfred. Later moving into Edgewood Mandan where he remained until the time of his passing.

He was preceded in death by his parents; twin brother, Wilfred, and his brother, Everette (Sheila); sisters, Marie (Roland) Arlton and Joanne (Larry) Crawford; sister-in-law, Roberta; and four nieces.

To order memorial trees or send flowers to the family in memory of William O. Hanson, please visit our flower store.